How to learn to play Musical notes

In order to preserve a piece of music for centuries, notes were invented. An untrained musician will not be able to play it without understanding how to read music. While a professional can easily reproduce any music, just by looking into a music book. It’s all about skill and experience. With the help of knowledge, you can easily play music by adding notes as you read a book.

To successfully understand the essence of musical notation, you need to turn to the origins.

Previously, music was passed from mouth to mouth, as well as literary works. But people understood that it was necessary to preserve it, and, accordingly, to learn how to systematize and write it down in a special way. Attempts to do so have varied.

In the III century. n. e. The ancient Greek music theorist Alypius compiled a list of symbols from Greek letters, each of which interpreted a sound of a particular pitch. The Romans also took advantage of this method, replacing Greek letters with Latin ones.

In the Middle Ages, neumental notation was used to fix notes. Especially often this method was used to fix the direction of movement of the melody when singing Catholic psalms. However, this technique was not perfect. With the help of it, the singers of psalms could only remember the previously learned melody. Such a system did not convey the pitch accurately.

Music theorists have been solving this problem for a long time. As a result, it was decided to introduce a certain reference point – a line for the sound fa. From it, the rest of the sounds were counted up and down. Later, another line was introduced for the do sound.

The teacher Guido Aretinsky introduced four parallel lines, on which neumes began to be depicted, each of which denoted a certain pitch. This is how the musical staff appeared in the history of music. The difference between the modern stave and the neume system of that time is only that there were five lines, and the neumes were replaced by notes.

Modern musical notation, the knowledge of which is necessary for writing music and playing it, is based on basic elements. The musician needs to learn the basics of the musical scale, understand the intervals and octaves.

The music system contains a number of sounds. They are placed in ascending order. There are 88 such sounds in total. Their main component is notes. These are original letters of music that reflect the pitch of the sound, as well as its duration.

The modern musical system consists of seven well-known sound designations. They are in a certain order:

Their repetition a certain number of times and ultimately forms a scale of 88 sounds.

The concept of intervals

Each note represents a specific pitch. Accordingly, each particular note is higher than the previous one written before it.

In order to read notes correctly, it is necessary to remember the essence of the interval designations. This is the relationship between simultaneously and sequentially taken sounds. There are two types of intervals:

The interval contains the top and bottom. There is a distance between them, which in musical literacy is measured by the number of tones or steps. Intervals are usually denoted by Arabic numerals. And their names come from Latin numerals.

The main characteristics of the interval:

According to the limits of the possibilities, a voice or an instrument can sound definitely low or high. The distance between these values ​​is called the range. In music, range is measured in octaves. It was chosen as a measure of measurement because it covers the entire scale of seven notes. There are nine octaves in music.

It is most convenient to understand the essence of the nuances associated with octaves on the example of a piano. His keyboard contains two incomplete and 7 full octaves.

VIEW:  How to remove tightness in the voice

It is customary to count them in music from the note to Do. Therefore, the first thing that is taught in any music school is to find exactly this note on the piano. To do this, you need to find a group of two black keys. Note C will be on the left.

Keys to the right sound higher, those to the left sound lower.

Location of notes on the stave

Musical instruments can sound in a different range. The tuba can produce counter-octave sounds, and the flute sounds up to the fifth octave. There are 88 keys on the piano, and it can sound both in the fifth octave and in the counteroctave.

The modern stave contains only five parallel lines. The question is how to place notes on them that can indicate such a difference in sounds. For this, the treble and bass clefs are used.

The treble clef in musical notation is otherwise referred to as the clef sol due to the fact that the note sol is located next to it. 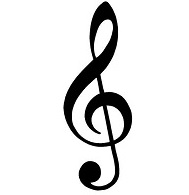 This clef is used for high notes and is not suitable for every instrument. If you write piano notes in this key, the musician will play them with his right hand.

IMPORTANT! This note is the note of the first octave.

Notes for violin, guitar or wind instruments are mainly written in this key, as they are able to reproduce notes from a small octave and higher.

Next to this key is the note Fa, so it is otherwise referred to as the key Fa. The use of the bass clef is not used as often as the treble clef. Bass lines are used in music to reproduce sound that is located below the small octave. 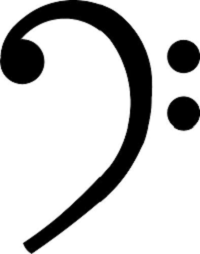 Basically, such a key is suitable for recording notes for instruments such as bassoon, bass guitar or double bass.

There is a huge difference in writing music in treble and bass clefs and how it looks in a music book. On the stave they have a completely different arrangement. Writing notes on the bass clef requires a separate memorization.

VIEW:  Hygiene and Routine of the vocalist's voice

Notation of notes on the rulers

The arrangement of notes in the treble clef is of fundamental importance in musical literacy. The basic rules for placement are:

Position of notes in the bass clef:

As you can see, notes in the bass and treble clefs are written differently on the stave.

In order to write low sounds, it is most convenient to use the bass clef. But many composers and musicians sometimes use additional rulers to record a small amount of sounds. For example, to record a note Before the first octave, an additional ruler is used.

REFERENCE! If you write a note in a treble clef, an additional ruler will be located below the usual stave, if in a bass clef – above the stave.

To record very high or very low notes, you can use not additional rulers, but the sign of eight.


Note: Please support wikilyrics by Sharing or dropping a comment here. Also, You can submit song lyrics, poem or anthem here and reach thousands of Audience!